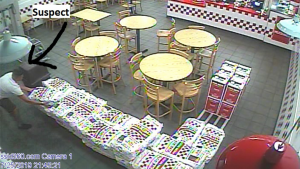 A Waltham, Massachusetts man was finishing up his meal.  He apparently, ordered some biggie fries to go.  So on his way out, he grabbed one of the 50 pound bags that the thoughtful management had placed by the door.

Images taken from restaurant’s surveillance footage, and later shared to Facebook by police, show two men ordering food at the counter of the restaurant, and later, one of them grabbing a sack of potatoes to go.

On Tuesday evening, police confirmed the suspect had actually reached out to contact them. The Waltham Police were not immediately available to confirm whether he was charged with any crimes.