Ain’t Braggin’ if’n you can do it.

Alexandria Ocasio-Cortez is the Anti-Trump 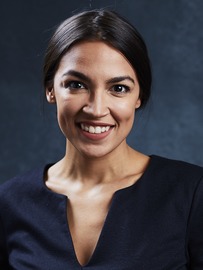 Bloomberg ominously warns that “Alexandria Ocasio-Cortez Is the Darling of the Left, Nightmare of the Right.”  Lions and tigers and bears.  Oh, my!  That warning is, of course, predicated on two assumptions: 1) that the “Right” is composed of every member of Congress with an (R) after their name; and, 2) that the lot of them have long since recovered from the emasculation surgery.  So Bloomberg is not completely off base.

But for the fact that the United States has a bleak history of community organizers who appear from nowhere on the political scene, she’d should be roundly ignored.  She possesses exactly zero qualifications for anything above – being generous – say, a filing clerk.  I doubt the republic would survive her ascendance to high office.  It certainly couldn’t recover from an electorate that would put her there.

To be fair, when she was a senior in high school, the International Astronomical Union named the asteroid 23238 Ocasio-Cortez after in recognition of her second-place finish in the 2007 Intel International Science and Engineering Fair.  Ocasio-Cortez was named the 2017 National Hispanic Institute Person of the Year by Ernesto Nieto.  This hyphenated, feminated, fem-gal has been a pain in the asteroid ever since.

She also earned a Bachelor’s degree in Economics and International Business from Boston University in 2011 (I have shoes older than she is) that undoubtedly helped her form her understanding of tax policy which includes confiscatory taxation.  Or in her words, “Once you get to the tippy tops, on your 10 millionth dollar, sometimes you see tax rates as high as 60 or 70 percent.”  I always get lost when economists use technical terms like “tippy tops“.

She is in all of her policy views, anti-conservative.  That’s a badge she wears with pride.  But she really owes her entire political existence to the man she loathes the most: President Donald Trump.  President Trump makes Ocasio-Cortez possible.  He tweets. She tweets.  He’s polarizing.  She’s polarizing.   Trump doubles down when challenged.  Ocasio-Cortez adopts this vapid, hair-twirling, teenage girl persona.  It’s all an act, of course . . . except for the vapid part.  Sure, CNN gives her press; but President Trump gave her life.

And I take issue with Bloomberg on their title.  Whatever bad you want to say about President Trump, he has flushed the liberal quail out of the brush.  Where’s Dick Cheney when you need him!

They are revealing more and more what they’ve always been and what they’ve always stood for.  Ocasio-Cortez is a “nightmare” to the Right like Elizabeth Warren  strikes terror in Trump’s heart by announcing her run for president.  Does the movie line “We’re having fish tonight!” come to anyone else’s mind.

The Libs, on the other hand, ought to be quaking in their collective Louboutins.  She is actually helping Trump in pulling back their thin veil of legitimacy.  She – like the entitled little brats that follow her on Twitter – doesn’t play be the rules.  She doesn’t follow orders.  She doesn’t play as a team.

And Alexandria Ocasio-Cortez is the anti-Trump.