Kenya continues to meddle in US elections.

Glad to come over for dinner and repeat it.

I like my New York Strip steak medium rare. A New York Times columnist became the laughing stock of Twitter after a professor shared an email from the writer complaining about being called a ‘bedbug.’

David Karpf, an associate professor of media and public affairs at George Washington University, took to his social media on Monday to share that columnist Bret Stephens took issue with a tweet the educator made in reference to news that bedbugs were in the NYT newsroom.  ‘The bedbugs are a metaphor,’ Karpf said in his initial tweet. ‘The bedbugs are Bret Stephens.’

The tweet had initially received a measly nine likes, which Karpf noted, but eventually made its way to Stephens.   In response, the columnist took to Karpf’s email and CC’d GWU’s provost.

‘I’m often amazed about the things supposedly decent people are prepared to say about other people – people they’ve never met – on Twitter,’ he said in the email that Karpf shared. ‘I think you’ve set a new standard.’

He continued: I would welcome the opportunity for you to come to my home, meet my wife and kids, talk to us for a few minutes, and then call me a ‘bedbug’ to my face.  ‘That would take some genuine courage and intellectual integrity on your part. I promise to be courteous no matter what you have to say. Maybe it will make you feel better about yourself.’

Bret Stephens was reminded of his previous First Amendment guardianship: 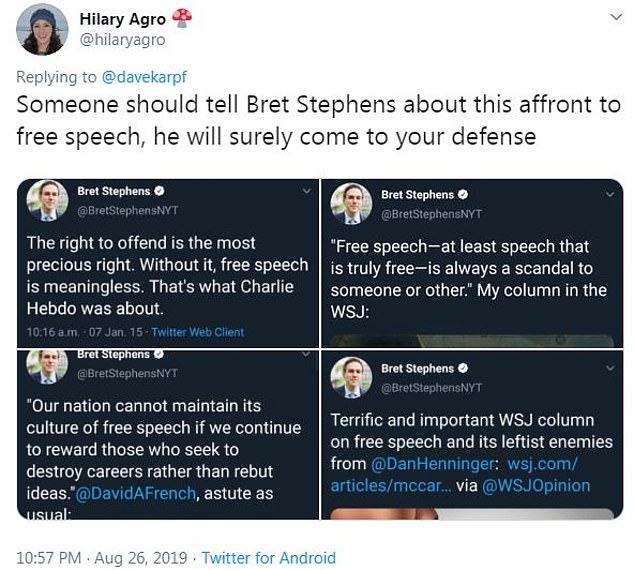 Unless, of course, you call a New York Times journalist a bedbug.

So what time is dinner?