Conor McGregor’s whiskey packs a punch. He hits like a girl. 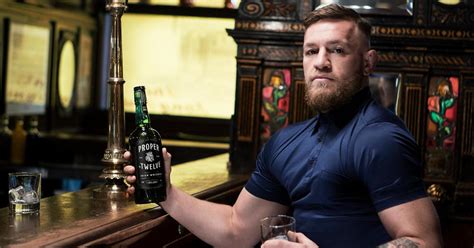 Conor McGregor sucker-punched an elderly grey-haired man in a Dublin pub after the customer refused to do a shot of whiskey with him, footage of the incident revealed today.  The ex-UFC champion was caught on CCTV in the Marble Arch pub in the Irish capital on April 6 pouring shots of his Proper Twelve whiskey – a brand which he founded and owns – for those sitting at the bar.

But after one man twice rejected his offer, McGregor threw a vicious jab into his face which caught him on the cheek, leaving onlookers stunned.  Despite being punched by one of MMA’s most high-profile fighters, the man, thought to be in his 60s, remained on his stool.

McGregor has landed himself in trouble more than a few times of late for his outside the ring hissy fits.  A member of his entourage noted, “Listen, Conor knows his career is over and he’s taken it a wee bit hard.  He’s just looking for someone that he can still knock down.  We’ll probably need to go cross town to the grade school.“

The unnamed gent who took the sucker-punch was sanguine about the whole affair, “I feel sorry for the lad.  His whiskey tastes like swill and he hits like a girl.  And that ain’t just the last pint talkin’ either.”