The Trump Election: the Gift that just keeps on giving.

Unless, of course, there’s actually red to see. 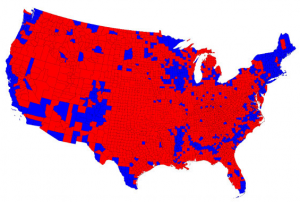 Donald Trump – make that President Elect Donald Trump – took so much guff when he declined to ratify an election that hadn’t even taken place yet.  The talking heads immediately went apoplectic.

CNN’s Van Jones, that self-appointed guardian of the democracy, became a sputtering, incoherent moron.  You may recall, among his more artful analogies, that “you can’t polish this turd” comment was joined by his conclusion that Trump’s refusal to endorse something that hadn’t happened yet was a sufficient to disqualify Trump from the race.

Turns out that Jones is a sputtering and incoherent nincompoop all the time.  I apologize for attributing that condition as a response to Donald Trump.  Now that the actual election is over (note to Van: Trump won! Nanny, nanny, boo boo!), Jones is demanding to be heard, crazily bullying anyone who might have something to say that doesn’t perfectly coincide with his hysterical victimhood, pondering the question of “how do I tell my children what happened?”

“Honey, yesterday we had a free and fair election where tens of millions of people voted to pick our next president.  Daddy didn’t get his way with this one, but that’s OK.  Lots of times in life you don’t get your way.  When that happens the best thing to do is to learn from your mistakes and do better next time.“

Looks like the only turd that can’t be polished is Van Jones.

And this insanity – this denial of democracy in action – is everywhere.

Donna Brazile, the interim leader of the Democratic National Committee, was giving what one attendee described as “a rip-roaring speech” to about 150 employees, about the need to have hope for wins going forward, when – as Hillary Clinton would say – a staffer identified only as Zach stood up with a question:

“Why should we trust you as chair to lead us through this?” he asked, according to two people in the room. “You backed a flawed candidate, and your friend [former DNC chair Debbie Wasserman Schultz] plotted through this to support your own gain and yourself.”

“You are part of the problem,” he continued, blaming Brazile for clearing the path for Trump’s victory by siding with Clinton early on. “You and your friends will die of old age and I’m going to die from climate change. You and your friends let this happen, which is going to cut 40 years off my life expectancy.”

Apparently, among their other endearing qualities, Dems are cannibals too!

Even the ancient philosopher queen, Jane Fonda, noted that she had been “hit by a truck.”  For a second, I thought one of my prayers had been answered, but it was just a figure of speech.  Outgoing (as in leaving, not as in charming) Senator – and documented prevaricator – Harry Reid noted that the new President has “emboldened the forces of bigotry and hate.”

Frankly, one of the most hilarious aspects of this election was watching the media and Hollywood elites implode.  And they are so stinking arrogant, so blinded by their false ideological way of thinking, that they don’t even get what happened.  They lost, they lost based on ideas and worldview, not because of the melanin content of their skin or whether they have indoor or outdoor plumbing.

It was a repudiation of all things Obama: unconstitutional executive orders, disastrous trade and immigration deals, Obamacare, and the Clinton criminal syndicate.

Jane Fonda is right: they got hit by a truck.  But they never saw it coming and even now don’t even have the license plate number.

What a great day!