America is No Man’s Land

I’ve been practicing law in metro Atlanta, Georgia for more than two decades.  One of the things that I incorporate into my practice is to set aside time to do pro bono (i.e., free; my children call it pro-bonehead) legal work.

A couple of months ago I found out about a criminal case. It was going on in a small town near my practice in Atlanta and was being handled by a public defender. The Client was a younger man in his 20’s, charged with some property crimes.

Speaking with The Client’s attorney, I learned that the accused was caught with the goods, as they say. As is often the lot of public defenders, this was factually and legally a losing case. Not much to defend and not much of a challenge for the prosecutor to make her case.

“What can I do to help you?” The Client’s attorney told me he really didn’t know. He was trying to diminish the severity of the sentence but the prosecutor and the judge were adamant that 10 years in prison was “the deal.”

“I don’t know. I really didn’t get into his personal life. But he seems like a young man with some real promise.” So I asked if he would like me to talk to his client. “Sure,” he said, “what do we have to lose?”

The following week I visited The Client. I had no idea what to expect. Would he be surly, full of excuses, angry at the world? The overwhelming weight of my experience is that legal trouble is always “someone else’s fault.”   What I encountered, however, was a young man humble, offering no excuses, remorseful, and eager to make amends. He shared the story of his life. As he knew it.

He was the product of a teen-aged white mother and an older than that black father. Raised by his paternal grandmother who dealt harshly with him. He was told that he would never amount to anything. He was shown little love.

The Client also reflected on the first year of his life. Obviously, he knew only what others had told him. He described a “rich white family from up North” who adopted him and of a long court battle over who would keep him. He said that he often wondered what happened to them and that he would love to ask them why they fought so hard to keep him.

Here, I must interrupt myself. Hearing The Client’s words sent me back in time to our family’s own journey into adoption that began more than a quarter century before. It started with a telephone call. A call I will never forget.

It was Someone I had never spoken to before.  Or since. Their tone was more of a dare than anything else. The caller suggested that if I cared so much about unborn children, why don’t I show some concern for a child that wasn’t killed. I disregarded the dubious logic and asked, “What are you talking about?”

The Someone told me of a child that was due to be born in a few months – a child that would be given up for adoption. “Give me a number. I’ll make the call.”

I did make the call, hired a lawyer. And waited. Late one night, the year was 1990, we got a call. Another in the litany of phone calls to never forget. The birth mother was in labor. My wife and I raced to the distant hospital. We were “greeted” icily by the hospital staff. They gave us two chairs. In a broom closet. We waited.

Finally, they brought a little boy to us. We loved on him, prayed over him, and thanked God for this precious gift. We named him Zachariah ( which means “God remembers”). Occasionally, one of the nurses would come into the room to check on us. As the night wore on, we were still excited but also falling victim to fatigue.

During the nurse’s next visit to our broom closet, she told me I was holding Zach incorrectly. I snapped back for her to leave me alone; we had six more children at home and I knew well enough how to hold a baby. She beat a hasty retreat.

A few minutes later, she re-entered with a completely different demeanor. “You know,” she started reluctantly, “this is a mixed-race baby.”

“Yes, we know.  What’s your point?” I asked. With that, she ushered us out of the broom closet and into a very nice private room. We enjoyed the comfort and got some rest until we were allowed to leave with Zach.

At home, Zach was a delight. He was loved on bountifully and loved deeply.

There was so much that happened during the next several months. But we were always so glad to have Zach in our home. In our hearts. In our family.

Months later I received another unforgettable call; this one, of the worst variety. My lawyer told me the birth mother had changed her mind and wanted her baby back. Our hearts were broken. Without boring you with the legal theories, our attorney told us that a court fight would be an uphill battle. So we fought uphill.

Through many hearings, in at least two different courtrooms, we fought. We hoped. We prayed. But we also lost. Through a cascading avalanche of tears, we were eventually forced to give Zach up. Though that was nearly three decades ago, reciting those words makes my heart hurt all over again.

Like many deep wounds, the hole in our family heart eventually scabbed and scarred. The tears didn’t flow anymore, but the recollection, reflection, and prayers continued. Best as I can describe it, it is a very, very sad happiness. Happy for the opportunity – the time we have together in the best of circumstances is short enough – but sad that it was over. Sad that maybe God hadn’t remembered. So achingly, dishearteningly sad that Zach was gone.

But The Client interrupted my interruption. I guess he thought that I hadn’t heard what he just said, so he repeated himself about the rich, white family from up north who he wanted to talk to someday.

With his recitation, I knew that I had to tell a part of The Client’s own story. So I reached into my briefcase. I showed him something that has been in the top drawer of my desk for twenty six years: 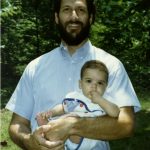 The Client stared and studied. After several moments, he asked me, “Is that me?” I told him it was. As he continued to take this in, he asked further, “Who are you?”

“I am the rich, white guy from up North.” I replied. “I’m not rich, I’m darker than you are, and, Atlanta isn’t up North.  But 26 years ago, we fought so hard because we loved you. And for the last 26 years, we have loved you, and prayed for you, searched for you, and hoped to see you again. We called you Zach.”

Of course, if you’re reading this, your story isn’t over yet. Neither is Zach’s. But I did tell the judge and the prosecutor the story that I have just told you. The judge sat – as judge’s often do – expressionless. The prosecutor – as prosecutor’s never do – declared it to be the best story she had ever heard.

The judge asked me what I wanted. I told him I had my son taken away from me twenty-six years ago. I didn’t want him taken away again.

Instead of prison, Zach received probation, which by all accounts is a miracle. Many challenges lay in the path before him. But he does not have to walk the path alone. So say a prayer for Zach and the many who are helping him to walk that path successfully.

One part of this story is that our family has had the opportunity to re-connect with Zach. The reunion has been sweet. Another part is that through his legal situation, he has also been able to connect with some of his mother’s extended family in a way that was not possible before. They are good, kind, and generous Christian people who are investing themselves in Zach’s life as well. But that wonderful story is for them to tell.

Even if this is not the best story you have ever heard, it’s still a good story. And every good story deserves a good moral.