My thoughts in pictures

The Face of Hurricane Matthew. 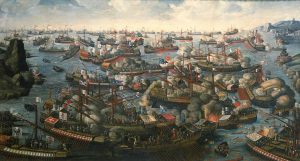 The Battle of Lepanto took place on October 7, 1571 when a galley fleet of the Holy League, a coalition of the Republic of Venice, the Papacy (under Pope Pius V), Spain (including Naples, Sicily and Sardinia), the Republic of Genoa, the Duchy of Savoy, the Knights Hospitaller and the Habsburgs, decisively defeated the main fleet of Ottoman war galleys.

The battle was a response to the Islamic seizure of Cyprus from Venice a few months earlier. The five-hour battle was fought at the northern edge of the Gulf of Patras, off western Greece, where the Ottoman forces sailing westwards from their naval station in Lepanto met the Holy League forces, which had come from Messina. Victory gave the Holy League temporary control over the Mediterranean, protected Rome from invasion, and prevented the Ottomans from advancing into Europe.

On Sunday 7 October 1571 the combined Christian fleets under Don John of Austria achieved a significant naval victory over the Turks in the Straits of Lepanto. Thousands of Christians were liberated, the Turkish fleet was destroyed, and they suffered their first great defeat at sea. In gratitude to God and Our Lady, Pope Saint Pius V ordered an annual commemoration to be made of Our Lady of Victory. In 1573 Pope Gregory XIII transferred the feast to the first Sunday of October with the title Feast of the Most Holy Rosary since the victory was won through invocation of Our Lady of the Rosary. In 1716 Pope Clement XII extended the feast to the whole Latin Rite calendar, assigning it to the first Sunday in October. Pope Saint Pius X changed the date to 7 October in 1913. In 1969 Pope Paul VI changed the name of the feast to Our Lady of the Rosary.

This last major naval battle fought solely between rowing vessels was one of history’s most decisive, ending Ottoman sea-power as well assuring European ascendancy vis-a-vis the Ottoman Empire. One of many epochal clash between the two rivals, it was part of what has been described as a wave-like motion of European-Ottoman encounter, as territory changed hands to and fro following a victory or defeat by either side. That epochal battles such as Lepanto took place is a fact of history.

The engagement was a crushing defeat for the Ottomans, who had not lost a major naval battle since the fifteenth century. To half of Christendom, this event encouraged hope for the downfall of “the Turk,” (read “Muslim”) whom they regarded as the “Sempiternal Enemy of the Christian.” (Translation for government school graduates: Sempiternal means everlasting or eternal.)

N.B. The Sempiternal Enemy is still afoot: In case you didn’t know.

So let’s remember with great fondness a bygone day when the Church (and, occasionally others) recognized who her enemy was and shrunk neither from naming him nor confronting him.  Those were the days.  Let’s party like it’s 1571!