Hong Kong whips up the brave.

And the Braves get whipped by the Reds (birds). “Free, Hong, and Kong” are not among the acceptable four letter words.

Sam Wachs and his wife attended Tuesday night’s preseason game between the Sixers and the Guangzhou Loong-Lions of the Chinese Basketball Association at the Wells Fargo Center.  The couple were kicked out of the after showing their support for protesters in Hong Kong.

Wachs and his wife were holding up “Free Hong Kong” and “Free HK” signs in reference to the ongoing protests in Hong Kong. Wachs said he lived in Hong Kong for two years and supports the protesters’ movement.

“We were just sitting in our seats near the Chinese bench,” Wachs said.  Security confiscated their signs.  They were kicked out of the game during the second quarter after they yelled, “Free Hong Kong.”   “What’s wrong with saying ‘Free Hong Kong’?”

According to Wells Fargo Center and NBA officials, the couple were removed “for hurting other peoples’ feelings  . . .  even if those people are in another country.  We try to maintain an environment where the crowd can yell as loudly as the want.  Especially if they’re drunk.  We let all kinds of four letter words in. It’s just that ‘free’, ‘Hong’, and ‘Kong’ aren’t among them.  That’s what’s wrong with that.”

Meanwhile Atlanta Braves fans ignored the wishes of their team and their opponent’s Native-American pitcher Wednesday night by continuing to perform their famous tomahawk chop during a blowout loss to the St. Louis Cardinals. 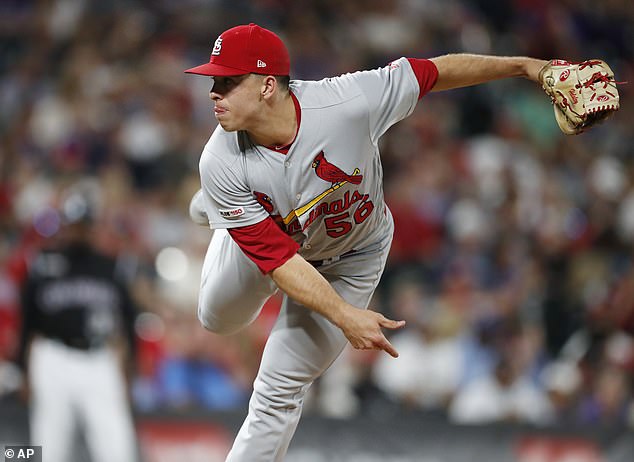 Rookie pitcher Ryan Helsley, 25, who is Cherokee, scalped the Braves.

The Braves organization made good on its promise not to distribute foam tomahawks to fans ahead of the game – a ritual the team has maintained for years – but that didn’t stop the Atlanta faithful from performing the tomahawk chop chant with their arms or belting the battle cry at the beginning of the game.

St. Louis rookie pitcher Ryan Helsley, 25, who is Cherokee told reporters on Friday he disapproves of how indigenous people are used as mascots in sports by teams like the Braves and the Washington Redskins.  Rookie Helsley makes heap big wampum, securing 30 blankets and 100 beaded necklaces a year.

His remarks came a day after he took the mound against the Braves in Atlanta as fans performed their long-time chant, complete with the waving of their novelty foam tomahawks.  “I think it’s a misrepresentation of the Cherokee people or Native Americans in general, just depicts them in this kind of caveman-type people way who aren’t intellectual,” Helsley told the St. Louis Post-Dispatch.

A Braves’ fan clarified the whole chant thing saying, “It’s got nothing to do with him being an Injun’ – dot or feather.  It’s that baseball players and fans are this kind of caveman-type people who aren’t intellectual.”

St. Louis beat the Braves the old Cherokee way by scalping them with 10 runs in the game’s first inning before going on to defeat their opponents 13-1, ending Atlanta’s playoff run and hopes of another World Series birth.