New York junior senator Kirsten Gillibrand is marginal candidate in 2020 Democratic primaries.  She acknowledged her position is in peril, pleading: “Please go to kirstengillibrand.com so I can make the next debate stage.“

Gillibrand was one of the candidates on stage Wednesday night, and falls toward the end of the pack. In an average of major polls, she earned 0.5 per cent support from likely Democratic primary voters.  She admitted at the end that this could be her last appearance. 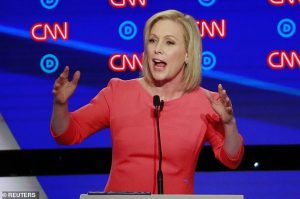 While the pack of Democratic hopefuls were tripping all over each other, each trying to portray themselves to be more radical than the rest, Gillibrand stole the spotlight when asked about her position on Domestic Policy.   Apparently thinking of a different meaning of “domestic”, Gilibrand responded:  “The first thing that I am going to do is Clorox the Oval Office.“

Sensing That Gillibrand had inadvertently gotten off the Democrat plantation, CNN Moderator and Democratic Operative Dana Bash, attempted to make light of the slip.  In so doing, Bash committed the second faux pas of the evening, “You know, Senator, that Bill Clinton hasn’t been in the oral – I mean Oval Office for nearly two decades.“

While the audience roared with laughter, Gillibrand misread the enthusiasm and doubled down: “And after that I’m going to do the White House dishes, fold the laundry, and then give my husband a foot massage.“

After the debate, it was reported that the Democratic National Committee leadership gave Senator Gillibrand a stern talking-to. 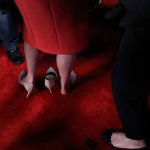 “In last night’s debate I was asked a question about Domestic Policy.  With all the excitement, I had a bit of a peroxide moment.  What I meant to say is that the first thing I would do as President is to perform an abortion on myself in the Oval Office.  Then I’ll do all that other stuff.“