Just put her down as undecided.

Ann Barnhardt sees and says things very clearly.  Her affection for the current occupant of the White House comes through.  Feel the love.

What did Obama say?

Continue reading here to find out.

Signs of the times.

Not a Photoshop… Taken with an iPhone on Rt. 101 in Thousand Oaks, California this week. 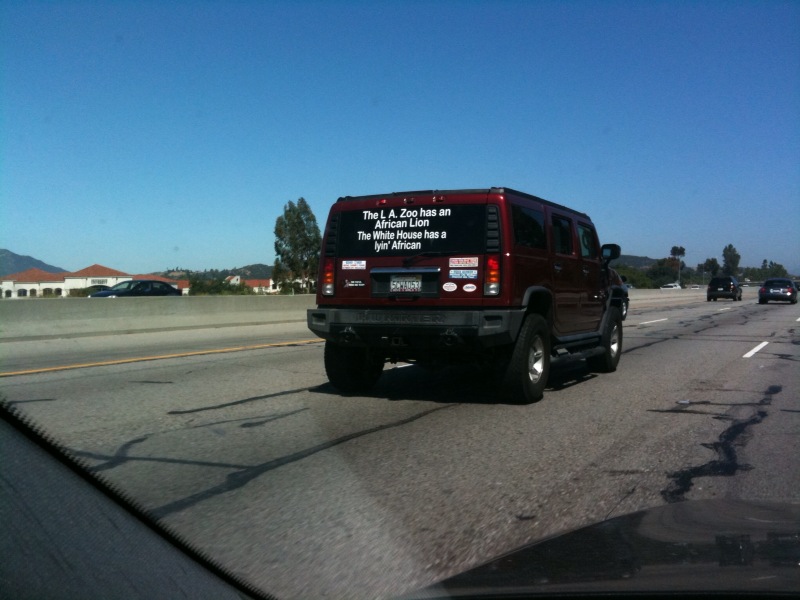 H/T to B. Scott
Send this article to a friend.

Shopping just got to be more of a pleasure.

Publix Mother’s Day ad great in more ways than one.

Remember, you heard it here first.

While VP Biden has a legendary knack for exaggerating, I’m takin’ his word for it on this one.

Notre Dame: A collection of suck-ups and sell-outs.

Straight from South Bend, that once august institution that has recently conferred an honorary degree on the most wicked occupant of the White House in history, arrested a bunch of prolifers for being on campus, and is fast becoming nothing more than a travel agency to hell, has banded together (well, sort of) to condemn one of their own who is actually faithfully proclaiming what the Church teaches.

As previously reported, Bishop Jenky of Peoria has compared our current regime with despots from years gone by: Mohammed, Stalin, Hitler, etc.  There is no truth to the rumor that the estates of these eternally incinerated dictators are suing the Bishop for defamation of character for making that connection.  But one of their fellow travelers, one Barry Lynn, who fashions himself a reverend and heads a group that wants to make sure that all people of faith sit in the back of the humanist bus has lodged a complaint with the IRS.

And right on cue, a group of professors from Notre Dame called Rodentia in Academia (because that’s what I call them), have drawn up a petition asking for the resignation of Bishop Jenky from the University’s Board of Fellows if he is unwilling to “renounce loudly and publicly this destructive analogy.”

These miscreants are obviously educated beyond their own level of incompetence.  They cite their collective concern for their “beloved university’s highest authority,”  they seem oblivious to, how do I say this, THE Highest Authority.

The petition is addressed to University President Father Jenkins who was solely responsible for the Obama commencement invite and the arrest of those who objected to the feting of the staunchest advocate that child-killers have ever had.

If this band of suck-ups and sell-outs is unwilling to renounce loudly and publicly their rebellion, they will face more than destructive analogies.

A man is known by the enemies he keeps.

Any enemy of Barry Lynn is a friend of mine.

The other day I expressed my deep appreciation for Bishop Jenky of Peoria.  The good bishop was just earning his keep, not to mention his ordination, when he created a bit of a timeline of the persecution of Christians, starting with the Romans, moving to the Musloids, mentioning the Bolsheviks and Nazis, and ending with the current occupant of the White House.

Enter, stage left (from where else!), the Reverend Barry Lynn, President of the Americans United for the Separation of Church and State.  Lynn is having a hissy because a “fiery homily delivered by Peoria Bishop Daniel Jenky last Sunday effectively urged Catholics to vote against President Barack Obama in the 2012 presidential election.”

Let’s just hope it was “effective.”

Lynn and his group have filed a complaint with the Internal Revenue Service.  “To be sure, Jenky never utters the words ‘Do not vote for Obama,'” Lynn wrote. “But the Internal Revenue Code makes it clear that statements need not be this explicit to run afoul of the law.”  On Wednesday, Lonnie Nasatir, the regional director of Chicago’s Anti-Defamation League, demanded an apology from Jenky, calling his remarks “outrageous, offensive and completely over the top.”  Hey, Nasatir, if you think the Bishop was “outrageous, offensive, and completely over the top,”  you should read my stuff more often.

You guys want some cheese with that whine?  Damned pagan crybabies!

Ironically and hypocritically, Lynn’s group regularly solicits donations that are tax deductible.  I wonder if Lynn is going to complain to the IRS about himself, since he is using his organization to engage in advocacy.  To be sure, Lynn never utters the words “Vote for Obama,” but I hear that the Internal Revenue Code makes it clear that statements need not be this explicit to run afoul of the law.

Godless humanism is never – not ever – about tolerance or ecumenism or whatever is supposed to be the politically correct buzzword of the moment.  There is no “coexist” between the Truth and lies, no matter how many different little symbols you use to spell the word.  Like it or not, it’s winner takes all.

Memo to Barry: The Truth wins.

Playin’ it in Peoria, baby!

“A Call to Catholic Men of Faith”

If the Catholic Church – and I mean anyone from any diocese – ever calls me for advice on what needs to be “fixed” about the Catholic Church, I would tell them two things: 1) get a better sales and marketing department; and, 2) restore masculinity to the priesthood.  Don’t worry, no one has and no one will.

But it seems to me, notwithstanding all the tripe about the Church being run by a bunch of disconnected old men who are insensitive blah, blah, blah, that there has been too much touchy-feely kind of governance.  You know, using declarative sentences (gasp!), denying the Eucharist to openly rabid pro-abortion politicians (double gasp!), and generally performing the manly tasks of a true shepherd by telling their flock that behaving in intrinsically evil ways will get you a first class, one way ticket to the extra crispy section of hell (CPR anyone).   And while I’m at it, the US Conference of Catholic Church Secretaries is running waaaaay too many shots!

Apparently Bishop Daniel R. Jenky of Peoria is psychic and doesn’t have to ask me.  At Mass on April 14th, Bishop Jenky delivered a homily that simply nailed it.  If I sound a little giddy, it’s only because I am.  He mentioned all the crown jewels of secular humanism:  Islam, Communism, Naziism, and Obama.

If the Catholic Church had a catalog, Bishop Jenky would be featured in the Men’s Department.

You can read the text of his homily HERE or listen to it HERE.  Some of the tastier morsels include:

For 2,000 years the enemies of Christ have certainly tried their best. But think about it. The Church survived and even flourished during centuries of terrible persecution, during the days of the Roman Empire.

And in the power of the resurrection, the Church will survive the hatred of Hollywood, the malice of the media, and the mendacious wickedness of the abortion industry.

The Church will survive the entrenched corruption and sheer incompetence of our Illinois state government, and even the calculated disdain of the President of the United States, his appointed bureaucrats in HHS, and of the current majority of the federal Senate.

May God have mercy on the souls of those politicians who pretend to be Catholic in church, but in their public lives, rather like Judas Iscariot, betray Jesus Christ by how they vote and how they willingly cooperate with intrinsic evil.

It’s what we call “Kickin’ butt and takin’ names for Jesus.”  Now if I could just have a word with Bishop Jenky about that Director of Sales and Marketing job.

Farrakhan, ever the optimist.