Who do we kill next, Part III.

While most will agree in principle, some tend to get a little jiggy around the edges when it comes down to particulars.   As I mentioned in Part I, one of my clients was executed for acting on a belief that some people, well, just needed to be killed. In the height of irony, the State of Florida, showed him how much they agreed with him. In principle. More recently, the Part II chronicled the City of Atlanta police who emptied a couple of extended magazines into a woman who was performing an abortion on her own post-partum child. Everyone was sad, but everyone agreed. She needed to be killed. At least in principle.

As noted by the New York Times:

The search for Mr. Awlaki, the American-born cleric whose fiery sermons made him a larger-than-life figure in the shadowy world of jihad, finally ended on [September 20, 2011]. After several days of surveillance of Mr. Awlaki, armed drones operated by the Central Intelligence Agency took off from a new, secret American base in the Arabian Peninsula, crossed into northern Yemen and unleashed a barrage of Hellfire missiles at a car carrying him and other top operatives from Al Qaeda’s branch in Yemen, including another American militant who had run the group’s English-language Internet magazine.

The strike was the culmination of a desperate manhunt marked not only by near misses and dead ends, but also by a wrenching legal debate in Washington about the legality — and morality — of putting an American citizen on a list of top militants marked for death. It also represented the latest killing of a senior terrorist figure in an escalated campaign by the Obama administration.

Awlaki’s death – more particularly, that he was killed – raises a wide variety of ethical issues.   One, for instance, seems to be the well-established rule of “imminence” that requires the wrongdoer be close in time and space to committing the wrong one is seeking to prevent.   Awlaki was driving along a Yemeni road, somewhat vaguely on his way to the next planning session of his next misdeed.  That the Obama Administration is taking the legal position that imminence is out the window is not only interesting, but it seems to me that certain members of certain professions would – how do you Americans say – be very concerned.

Apparently another well-established principle is now gone. Finite! Kaput! That is the use of the United States military against United States citizens. Now dispatching Awlaki might have been a good call. I mean, after all, we all agree that some people just need to be killed.

But hard cases usually make bad law. They just do usually make it so quickly. Today the Obama Administration declared:

The government lawyers, CIA counsel Stephen Preston and Pentagon counsel Jeh Johnson, did not directly address the al-Awlaki case. But they said U.S. citizens don’t have immunity when they’re at war with the United States. Johnson said only the executive branch, not the courts, is equipped to make military battlefield targeting decisions about who qualifies as an enemy.

Get that? The executive branch gets to make unfettered executive decisions about “who qualifies as an enemy.” Hello! Anybody home?

Now there’s no need to get one of those bothersome warrants. Constitution, schmonstitution. Get your self declared to be an enemy of the state and presto, blammo you’ve been terminated with extreme prejudice.

While I admit my own intrigue with the technology involved, zapping someone with an extraordinary payload, delivered by an unmanned drone, remote controlled by who-knows-who, operating from who-knows-where is pretty nifty.

But it kinda makes me a little jiggy around the edges when the commander-in-chief seems like he’s more at home playing video games than anything else.

A Poem for All Single People

So, be cool too and pass it on.

Newt is the anti-Mitt.  While that’s OK as far as it goes . . . it simply doesn’t go very far.   You’d think I’d be downright giddy to have a prolife Catholic convert running for President.  Not so much.

A video montage from the Ron Paul campaign captures some of my concerns about Newt.  You have any?

Be careful what you post. For that matter cancel your FB altogether. 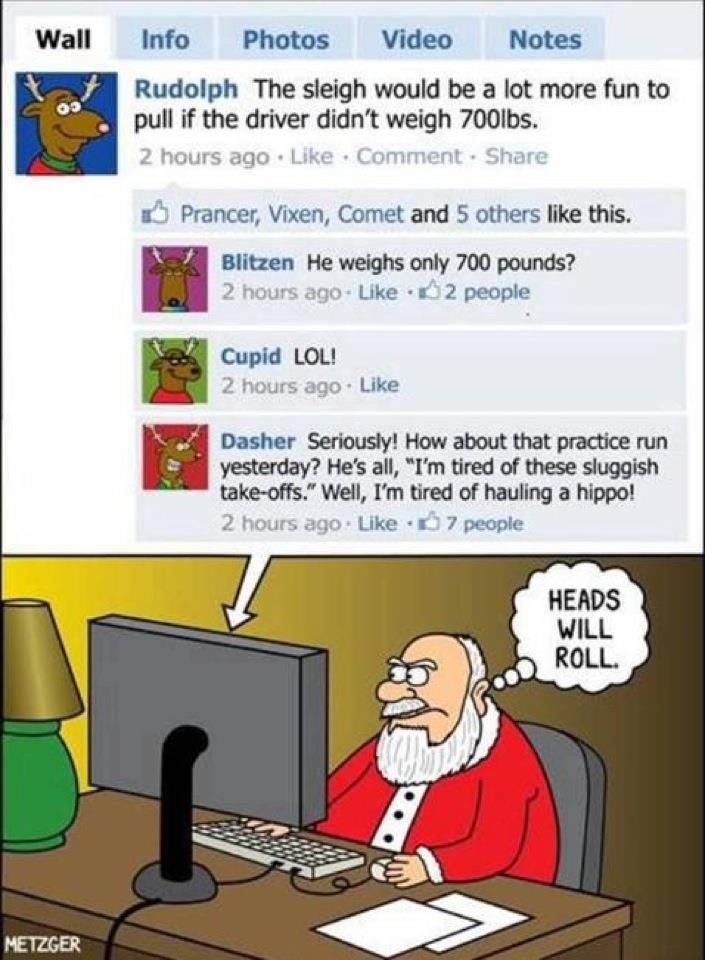 Old St. Nick's not the jolly old elf he used to be.

Notes from the Tolerance Front.

Players kicked off team for swinging from both sides of the plate.

In what can only – or at least, most charitably – be described as a confused nation slipping further into the abyss . . .

A gay softball organization has agreed to pay an undisclosed sum to three players who were disqualified from its 2008 Gay Softball World Series because of their perceived heterosexuality.  And as part of the settlement announced Monday, their team will be awarded the second-place trophy it was denied at the time. The men — Stephen Apilado, Laron Charles and John Russ — filed the federal lawsuit against the North American Gay Amateur Athletic Alliance last year, claiming they had been discriminated against because they were bisexual, not gay.

But wait, there’s more.  The organization had a meeting followed by a limp-wristed show of hands vote.  According to the article, Apilado, Charles, and Russ might of been born gay, but they were voted to be straight.  At least too straight to play.  How democratic!  How queer!

Softball used to be boring.  Now it’s disgusting too.

Who do we kill next, Part II

Atlanta cops kill mom who was killing her post-partum child.

As I opined in Part I, timing is everything.

Like it or not, most would agree with Holy Scripture when the observation is made there is a “time to kill.”  At least the police of the City of Atlanta agree.

When officers forced their way into home, they found the woman seated in a chair and stabbing the child, according to Carlos Campos, police spokesman. Hines was ordered to drop the weapon, but did not, so officers fired several shots at the woman, police said.

Seems like a mother, one Carulus Hines was performing a post-partum abortion on her 243 week old fetus.  As happens with so many abortions, this one was botched, resulting in the death of both mother and her born child.

So draw your own conclusions and make your own inferences.  But wouldn’t it be interesting if police in the City of Atlanta adopted, how would you say, a more consistent approach?

Pay particular attention to the video at about 1:58, when the police official observes “It appears that the officers were responding to save the life of the young child.”

A woman’s place is in Homeland Security.

I’ve been a guy for my whole life. I have nine sons and four grandsons. I think I speak for guys everywhere when I say that there’s nothing quite as entertaining as things that go boom. Pretty sure that’s why the Founding Fathers came up with the Second Amendment. Getting to dispatch tyrants was just icing on the entertainment cake.

So it was with some interest that I note that Janet Napolitano latest public service directive. You probably know Janet as the Director or Czar or something of the Department of Homeland Security (DHS). Maybe you’ve heard her referred to – both affectionately and derisively – as “Big Sis”, an oblique reference to her Orwellian omnipresence in our daily lives. Still others think of her as the greatest female impersonator since Eleanor Roosevelt – if you don’t count Janet Reno.

In any event, Janet has weighed in with some suggestions – I think she actually intended it as a warning – on the impact on National Security that arises when guys with WASPish surnames and backward ball caps everywhere are dropping turkeys into fryers designed for that purpose. The DHS warning also includes a video that shows what can happen if you impose your morality on a not quite thawed bird. Cool.

While this opens up alternatives to mixing dry ice and water and acetylene in garbage bags, I guess this means that you will no longer get that device, formerly used to fry turkeys, past those ever-vigilant TSA watchmen at airport security. Unless you can hide it under a turban, of course.

Janet has proven once again that any semblance of jurisdictional limits are erased. Homeland Security – Homeland Security! – is telling us how to cook Thanksgiving dinner. She’s also proven that we’ve become a nation of emasculated imbeciles that cast our eyes upon Capitol Hill from whence cometh our help. Sheesh!

And, finally, by offering this sage – and parsley, rosemary, and thyme – cooking advice Janet shows us that that no matter how much she tries to repress it; no matter how latent the inclination, a woman’s place is in the home.

What’s the point of the warning signs?

Fulton Sheen. Now more than ever.

Winner really does take it all.

It may very well be that the Communists, who are so anti-Christ, are closer to Him than those who see Him as a sentimentalist and vague moral reformer. The Communists have at least decided that if He wins, they lose; the others are afraid to consider Him either as winning or losing, because they are not prepared to meet the moral demands which this victory would make on their souls.

If He is what He claimed to be, a Savior, a Redeemer, then we have a virile Christ and a leader worth following in these terrible times; One Who will step into the breach of death, crushing sin, gloom and despair; a leader to Whom we can make totalitarian sacrifice without losing, but gaining freedom, and Whom we can love even unto death. We need a Christ today Who will make cords and drive the buyers and sellers from our new temples; Who will blast the the unfruitful fig-trees; Who will talk of crosses and sacrifices and Whose voice will be like the voice of the raging sea. But He will not allow us to pick and choose among His words, discarding the hard ones, and accepting the ones that please our fancy. We need a Christ Who will restore moral indignation, Who will make us hate evil with a passionate intensity, and love goodness to a point where we can drink death like water.

Killing and proud of it.

Curtis Boyd boasts about a lot of things:  being an ordained Baptist minister and, oh yeah, killing unborn children.  He even brags that he’s not going to quit.  On that point, Curtis and I have some disagreement.  He also is proud of the fact that he’s aborted the children of girls as young as nine and ten.

Could he, like so many other abortionists, be providing cover for child molesters who impregnate young girls?  Naah.