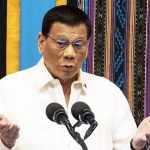 Philippine President Rodrigo “Pharaoh” Duterte threw another punch in his perennial fight with the Catholic Church.  Notwithstanding the fact that 80% of the 100 million residents of the fiefdom are Roman Catholic, Duterte asserted today that “the Catholic Church’s dogma was simply not acceptable to my God-given common sense.”  When pressed for some evidence for this claimed common sense, Duterte responded with an out-stretched middle finger.  The Philippine strongman then  ordered: “More bricks, less straw.”

This many flies can’t be wrong.

Upon this edict Duterte was set upon by flies.  The flies are Scathophaga stercoraria, more commonly known as the yellow dung fly, known particularly for their excrement locating prowess.  “I’ve had fights with priests for a long time.  These flies are taking orders from them.  They’ve been following me all week. ”  Duterte latter cursed the flies and made a failed attempt to swat one that landed on his nose.

Today’s incident was not the first time Duterte had a public appearance ruined by insects.  In May of this year, cockroaches crawled up his shoulder and down the front of his shirt as he spoke at a campaign rally.

A local priest was asked if he had anything to do with either plague.  Speaking on the condition of anonymity for fear of reprisals – from the Vatican – the priest admitted that the bugs were in fact doing his bidding: “Yes, I sent them.  But it’s not really a miracle.  It’s just what they do.  The next eight plagues . . . well those are going to be something.”