Is the election rigged or not?

Take the “Will I impose my Morality” quiz.

You don’t have to read too many news stories to get the idea that morality questions abound.  It used to be the case that “wrong was wrong even if everyone was doing it; and, right was right even if no one was doing it.”  That’s all changed, apparently.

And it’s not until the last few years that “intolerance” was even something bad.  But isn’t that a moral judgment in itself? 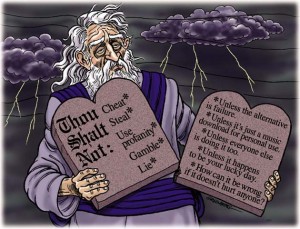 But there is no shortage of opportunities for us to express our moral outrage.  Whether it’s Ryan Lochte lying about whether he was robbed or America’s current favorite villain – Anthony Wiener sending photos of his, ahem, undercarriage across the internet.  And why is it more morally outrageous that he did so while his young son lay sleeping next to him?

To find out where you fall, I suggest you take the “Will I impose my Morality on Someone Else” quiz.

The point is, morality is the only thing that can be enforced.  The only question that remains is whose?  You can not cite any law, anywhere, at any time in history that is not a reflection of a moral order.

The reason that there are laws against murder is, well, because “Thou shalt not kill.”  Ditto for stealing.  But the second that we adopt any moral code that is not transcendent – that is, not bigger than ourselves – is the very same second that we have become lawless.

So when we hear some politician utter some tripe about being “personally opposed to ___________, but I don’t want to impose my morality on anyone else” know that that person (politician or otherwise) is duplicitous, cowardly, and lawless.

By the way, Bruce Jenner is just a dude in a dress.