That’s the least of your problems.

Hundreds of irate parents are planning to attend the Walton County, Georgia, school board meeting Oct. 10 to convey their outrage over their children being taught the religious beliefs of Islam in middle-school social studies.

The outrage erupted over a quiz handed out to students asking them to answer questions related to the five pillars of Islam, the Quran as the “holy” book of Muslims, and the conversion prayer known as the “shahada,” which states, “There is no god but Allah and Muhammad is his messenger.” Perhaps most disturbing to Christian parents was the “correct” answer that the Muslim god Allah is the “same god” that is worshiped by Christians and Jews.

At the same time Islam is being studied in detail, the beliefs of Christianity are glossed over, parents say. They now have more than 2,300 parents and concerned citizens who have joined a Facebook group dedicated to opposing the school system’s methods of teaching comparative religions.

“I believe my children are my responsibility, and I believe I need to be the one teaching them what we believe instead of the school.”

Read the rest of the story here.

Christian parents are all in a dither because their precious little children are being required to take field trips to their local mosques (that includes dressing in musloid-approved attire and bowing to Allah), to write papers extolling the virtues of the islamic pseudo-religion, and to be catechized in islamic  tenets.

Waaa, you big baby.  Cry me a river.  Want some cheese with that whine.

I’ve spent most of the last three decades listening to Christian parents tell me why their local government school is good; the ubiquitous exception to a rule that they will gladly impose on others who are not so fortunate to have a teacher “who’s a really strong Christian.”  Except, of course, that if this “really strong Christian” utters a peep about her faith, she will be fired faster than your child can say Allahu Akbar.

Willing participation in the government education system by Christians is right up there with having cable sewage pumped into your living room, gluttony, and profaning and disregarding God’s command to “remember the Sabbath Day and keep it holy.” That last one finds its origins in the Old Testament, or as they call it at the local evangelical/protestant ecclesiastical experiment, “that 2/3 of Holy Scripture where God was only kidding.”

*In short, it’s all – and I mean ALL – a bunch of garbagisimo, which is an Italian expression that shares the same etymology as the Spanish phrase el toro poo poo.*

Don’t get me wrong, I hate islam.  It is satanic, barbaric, and . . . well that’s all the charitable adjectives I can come up with at the moment.  But your sweet little darlings playing musloid dress up is probably among the least offensive things they have been subjected to at the government re-education camp.

Now that I’ve obliquely told you what I think of islam and the government school system, allow me to tell you why:

First, you must understand the premise that ALL education is intrinsically religious.  Education can not take place in the absence of a moral/theological/philosophical worldview.  It can’t happen.  Interestingly, there are even U.S. Supreme Court decisions that recite this fact.  This leaves only one question: whose moral/theological/philosophical worldview will be taught?

Second, government schools violate at least two of the Ten Commandments:  “Thou shalt not steal” and “Thou shalt have no other gods before me”.

THOU SHALT NOT STEAL

“Thou shalt not steal” forbids you from taking money and possessions from me against my will.  That also applies to you using some thug – even the jackbooted thugs in Washington – to do your dirty work for you.

More than seventy-five percent of property taxes, dollars taken by force from the property owners, are used to fund government schools.  This doesn’t even count a large chunk of federal income taxes that are stolen for the same purpose.  But, you say, “I pay taxes too!  So I’m not stealing by participating in the system.”(*)  Your taxes don’t cover the cost that you are incurring which is why money has to be stolen from me and your other neighbors who aren’t gaming the system.

So the next time you get all righteously indignant when someone in the grocery line buys prime rib with an EBT card and leaves the store in a German car, remember that you are doing the same damnable thing.  You are nursing at the same government sow.  You are just fortuitously sucking on a different porcine nipple. 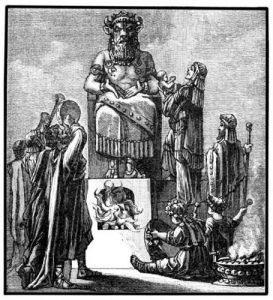 THOU SHALT HAVE NO OTHER GODS BEFORE ME

Then there’s that subtle Commandment about having “No other gods before me.”  Isn’t it just a wee little bit interesting that the First Commandment is the one that the Children of Israel kept doing again and again.  Are we any different?

One of those false gods was Molech.  Molech was an idol that was fashioned with his palms up, his arms out stretched.  In a hollowed out portion of the idol a fire was built until the hands glowed white hot.  Children were placed in Molech’s hands by their parents as a sacrifice.

Send your children to a government school; place them in the hands of Molech.  The fact that some children might be miraculously spared incineration in either the former or present-day iteration of Molech doesn’t reduce this idolatry.  Not by a single degree.

You can ignore this truth at the peril of your own soul and (I hope more important to you) the souls of your children.  And if you disagree with any of the following, jump into the comments and call me out on it.  Bring it.  Resort to vapid, emotion-based red herrings like “you don’t know my situation, my school system is different, etc.”  and I will direct your attention to the (*) above.

Do I realize that someone is going to be offended? Yep.  Do I care? Nope.  Why?  Because friends don’t let friends go to hell.

Pull your children out of the damnable government re-education center and stop placing your hope in a thirty second prayer at the end of twelve years of pagan education.  Either that, or you could just return to your Dancing with the Stars, Keeping up with the Kardashians, or your particular whore-mongering of choice.