A Pennsylvania woman was not to be outdone by her Massachusetts colleague who made of with 50 pounds of spuds. 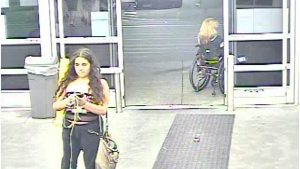 Grace Brown is accused of urinating on potatoes inside a Pennsylvania Walmart.  She has reportedly turned herself in to authorities Tuesday afternoon, according to a local news outlet.  Apparently Ms. Brown really had to go as the bizarre incident took place late July 24 into early July 25. The West Mifflin Police Department released photos of the woman taken from surveillance video at the store in hopes that someone in the community would identify her.

Upon her arrest, Ms. Brown claimed to be the victim in all this: “Why does Walmart have cameras in the bathroom!”