And all this time I thought public schools were worthless. 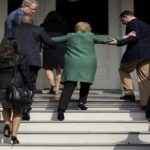 The Cult of Clinton in the former Republic.

Probably the most enjoyable part of the whole post-election observation, is watching all the celebs’ and media talking heads’ faces melt every time they have to deal with their fallen angel’s demise.   I’ve written of my glee elsewhere.  My goodness this is fun to watch.

Some have criticized my gloating as being unchristian.  Of course, this coming from a quarter that has never before in their lives been even remotely concerned about what Christianity – and the true Messiah, Jesus – has to say about anything.  He was the One that rose from the dead.  Hillary, not so much.  Maybe their right though.  I’ll take care of that in Confession later.  Or not.

I was thinking of a time when mocking false messiahs and their surrogates was a little more fashionable.  Come to think of it, those opportunities don’t come along too often, as evidenced by the fact that I have to go back about 3000 years:

And at noon Elijah mocked them, saying, “Cry aloud, for he is a god. Either he is musing, or he is relieving himself, or he is on a journey, or perhaps he is asleep and must be awakened.”  And they cried aloud and cut themselves after their custom with swords and lances, until the blood gushed out upon them. And as midday passed, they raved on until the time of the offering of the oblation, but there was no voice. No one answered; no one paid attention.

It’s just an analogy and to head off my critics, I’m not saying that President-Elect Trump (I love saying that)  is a messiah of any type.  But there is a takeaway from this story for Team Trump: prosecute Hillary Clinton.  Like you promised.  Like justice demands.  You want to “heal” this country?  Justice does that.

Brendan O’Neill seems to share at least some of the giddiness in a well-written piece:

If you want to see politics based on emotionalism over reason and a borderline-religious devotion to an iconic figure, forget the Trump Army; look instead to the Cult of Clinton.

What’s funny about this is not simply that it’s the biggest chattering-class hissy fit of the 21st century so far — and chattering-class hissy fits are always funny. It’s that whatever you think of Trump (I’m not a fan) or his supporters (I think they’re mostly normal, good people), the fact is they’ve got nothing on the Clinton cult when it comes to creepy, pious worship of a politician.

By the Cult of Hillary Clinton, I don’t mean the nearly 62 million Americans who voted for her. I have not one doubt that they are as mixed and normal a bag of people as the Trumpites are. No, I mean the Hillary machine—the celebs and activists and hacks who were so devoted to getting her elected and who have spent the past week sobbing and moaning over her loss. These people exhibit cult-like behavior far more than any Trump cheerer I’ve come across.

Trump supporters view their man as a leader “fused with the idea of the nation”? Perhaps some do, but at least they don’t see him as “light itself.” That’s how Clinton was described in the subhead of a piece for Lena Dunham’s Lenny Letter. “Maybe [Clinton] is more than a president,” gushed writer Virginia Heffernan. “Maybe she is an idea, a world-historical heroine, light itself,” Nothing this nutty has been said by any of Trump’s media fanboys.

“Hillary is Athena,” Heffernan continued, adding that “Hillary did everything right in this campaign… She cannot be faulted, criticized, or analyzed for even one more second.”

That’s a key cry of the Cult of Hillary (as it is among followers of L. Ron Hubbard or devotees of Christ): our gal is beyond criticism, beyond the sober and technical analysis of mere humans. Michael Moore, in his movie Trumpland, looked out at his audience and, with voice breaking, said: “Maybe Hillary could be our Pope Francis.”

Or consider Kate McKinnon’s post-election opening bit on SNL, in which she played Clinton as a pantsuited angel at a piano singing Leonard Cohen’s “Hallelujah,” her voice almost cracking as she sang: “I told the truth, I didn’t come to fool ya.” Just imagine if some right-leaning Christian celeb (are there any?) had dolled up as Trump-as-godhead and sang praises to him. It would have been the source of East Coast mirth for years to come. But SNL’s Hallelujah for Hillary was seen as perfectly normal.

Like the prophets of baal, Hillary and her surrogates, still have no clue what happened in the last election.  Let’s not forget that those who fail to understand history are destined to repeat it.  And that is good news, indeed, worthy of your happiest, most gleeful emoticon.