Behold! The Compassion of the Wicked.

Racist Gull tells Mexican to “Go back where you came from.  In fact, I’ll take you there myself.”

Possible retaliation for chewing up a MAGA hat.

Reports are coming out of England that mobs of mostly-white seagulls are searching for less-privileged birds and mammals in a globally-warmed environment  that is leading to a scarcity of food.  Some of the more ravenous gulls are even resorting to cannibalizing more junior members of the group.

Rebecca Hill is desperate to get her beloved chihuahua Gizmo back.  Her beloved pooch was napped in broad daylight.  She said the bird swooped and carried off the pooch as partner Ashley Rawlings looked on horrified. 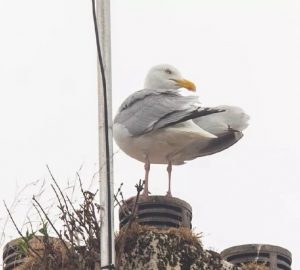 Pictures have emerged of a fierce-looking seagull close to the home as a search for the beloved dog continues.  One neighbor said: “It is impossible to know if this particular gull was responsible but the way he was lurking must surely make him the prime suspect.”

Speaking to a British tabloid yesterday, pregnant Becca, 24, urged neighbors to keep an eye out for her loveable pet in the desperate hope he is still be alive.  She sobbed: “I’m just hoping he’s been dropped somewhere and can’t get out or he’s on a roof and can’t get down.”

Ms. Hill continued, “If these animals want to feed on themselves, that’s on them, but to pick on my Mexican Chihuahua, who was here legally, is sub-human.  As long as US President Trump continues a blind eye toward climate change, this is only going to get worse!” She observed.  “All this started when sweet Gizmo was caught chewing on a MAGA hat” Ms. Hill lamented.

When asked how the US Prez was responsible for climate change in Great Britain, Ms. Hill simply repeated, “Gizmo, Gizmo.”  When a reporter observed that seagulls actually are sub-human, Ms. Hill shot back “Species Snob!”

Becca initially posted an appeal on Facebook for help in finding Gizmo but had to then take it down after she was targeted by sick trolls making fun of her plight.

On Friday, a gruesome rabbit leg – initially feared to belong to missing Gizmo – was discovered by walker Natalie Williams on a roof colonized by seagulls that is littered with animal debris.  A chicken’s head and a dead gull – cannibalized by other gulls – have also been found at the site.

Experts believe gulls are becoming increasingly cannibalistic – as well as developing a taste for other birds and mammals – as the UK’s seawater temperatures soar due to climate change.