“You mean like wipe it with a cloth or something?”

Where do you start with the list of bad things to say about Hillary Clinton?  I mean she’s never seen an abortion she didn’t like.  She’s enabled her husband to be the sexual predator that he is.  She’s been an operative in a criminal enterprise for years; with impunity.  She lies like a rug . . . and to add insult to injury, she’s not even good at it.  At all. 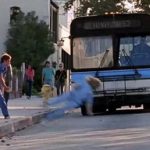 But I sort of think this beats all.  You’ve heard the expression “honor among thieves.”  Well, Hillary doesn’t even regard that.

The ink’s not even dry on Jim Comey’s letter to Congress announcing the investigation ain’t exactly over, and the Hildebeast is throwing her closest and longest serving advisor under the bus, referring to Huma as “one of my staffers.”

Huma? Who ma? What.  Oh, you mean one of my staffers? Sort of heard of her, but not really.  Why of course the FBI ought to be looking at her computer.  Poor, silly girl.

Seems like I had a drink by that name at a bar just yesterday morning.  It was a Manischewitz whine married to a Saudi liquor.

Hillary’s soul must already be in hell, because it’s sure not in her body.