The Church’s relationship with the Muslims. “The plan of salvation also includes those who acknowledge the Creator, in the first place amongst whom are the Muslims; these profess to hold the faith of Abraham, and together with us they adore the one, merciful God, mankind’s judge on the last day.”

Catechism of the Catholic Church, Paragraph 841. 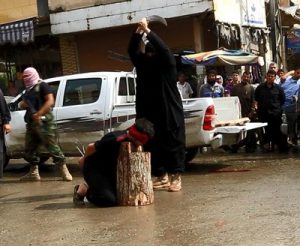 I was discussing Paragraph 841 of the Catechism of the Catholic Church (CCC) with a friend of mine.  Pretty much, we both believe it to be – shall we say – an inaccurate recitation of reality.  But we differ slightly as to why it’s in there the way it is.

He said it was just a marketing tool.  My first thought to his comment was if there’s one thing the Catholic Church could really use about now is a Sales and Marketing Department.

Then I offered, “Well, that’s the first time I’ve heard the idea that Paragraph 841 was ‘marketing.’  I’m not sure that’s exactly something to be proud of.  I mean, it’s certainly horrid theology (Paragraph 841, I mean) but it’s even worse – marketing blasphemy, if you will – in terms of marketing.”

For crying out loud, has anyone, ever, on the whole planet, at any time in history, or will such a moron exist in the future say “”Gee golly, I wasn’t going to even consider the Catholic Church or attempt to defend any of her teachings, but then I saw this wonderful, delightful, ecumenical, inclusive Paragraph 841 and it changed my life forever! Where do I sign?”

On the other hand, I know at least one rather large family that (if anything) was impeded from entering the Church over this Paragraph (and perhaps a misapprehension of the authority of the Catechism as well).

One of the responses I got to my What the heck’s with Francis Beckwith article was that we don’t need to be arguing over semantics when people are dying (referring to the massive scale torture, beheading, etc. of those who “profess to worship the same God.”).  My response was, “Dear Snowflake, words mean things.  It is precisely because people are being killed (I don’t think the passive “dying” is precise enough) that we need to be arguing over semantics.”

A friend poked at me a bit (rightly) asserting that I get “riled up” about this particular issue.  If I have one disagreement with that characterization by him it’s that it is misleadingly understated.  I mean, these murderous thugs are the only group reproducing at greater than replacement rates; they’ve become the majority in several countries in Europe; they are invading our own country, aided and abetted by our courts.

And you don’t have to speculate as to their aims.  Watch a video (or 10) to see what these rat bastards are all about.  Not only will they tell you, they’ll show you.  I watched one such beheading and my first thought was, “you know, I really think I could be a sniper.”  and if you hear Cardinal Burke use that line, just remember you read it here first.

At the risk of being characterized as being overly dramatic (claiming I get that way when riled, no doubt), I don’t recall a time since my higher level of prolife activism (a dozen or so arrests, a month in jail for one of them, representing Paul Hill, writing a law review article/Master’s thesis that use of such force would be justified, etc.) when I have taken so much flak.  At least in the prolife context, most Catholics were in general agreement.  Now, semantics being what they are, Catholics are a big part of the problem.

So, in an effort to be a problem solver and not just a riled up whiner, I am working on a Revised Paragraph 841.  Now, remember, it’s just a draft but you might want to make your comments before it gets enshrined in the new Catechism.  It’s coming out just as soon as this Bergoglio interloper exits the scene (Maranatha!).  To wit:

The Church’s relationship with the Muslims.  Often called “the people of the conjugal goat”, Muslims profess to hold to the faith of Abraham.  Of course, an 8th grade logic class would remind anyone that “professing” and “actually doing” are not the same thing.  Muslims, together with us, are in desperate need of – and wholly dependent on – the mercy of Christ who will judge mankind on the last day.  God’s plan of salvation includes all people, for all time; just like it included equally Moses and Pharaoh.  One was for divine blessing and deliverance; the other, to show forth the power of God through his temporal and eternal destruction. (See Exodus 6-12; Romans 8).  For the people of the True God, the so-called “religion” of Islam must be understood to be not a religion at all, but a political system that co-ops bits of religious jargon.  Individually, those enslaved to this political system should be prayed for and evangelized that they might inherit the rewards of Moses rather than the fate of Pharaoh, but culturally and temporally, the faithful Christian is duty bound to pray against and oppose the political system called Islam as not only false, but wicked, .  This has long been understood by the Church in varying ways through the centuries.  (See, e.g., the good and holy example of Pope St. Urban of blessed memory.)

Yeah, I know, it’s a little long, but there is serious need of repair.  And I get long winded when I’m riled.