John Kerry exercises his right as an American.

The Right to be Stupid shall not be infringed.

He’s sure it’s in the Constitution somewhere . . . probably right next to that whole separation of church and state thingy.

And if there’s one thing that the Obama administration in general – and John Kerry throughout his political life, in particular – embodies is stupid.  This is doubly true if you treat “stupid” and “wicked” as synonyms, which they are if you consider the eternal implications.  Which we’d better.

They owe their collective political lives to stupidity.  Their own stupidity and the stupidity of those that elected (and keep electing) them to office. 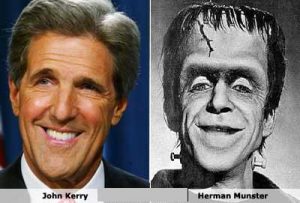 John Kerry was in favor of stupid long before he was against it . . . oh, wait, he’s actually always been in favor of stupid.  About the only smart thing he’s done is marry Theresa Heinz Kerry.  Even that one’s a close call.  By my estimation he’s earned every penny of that money.

On his first official trip as Secretary of State, Kerry is in Germany extolling the virtues of stupid.  As if his audience needed proof, Kerry shared one of his childhood adventures during which he “snuck out of the American embassy in divided postwar Berlin at age 12 for a clandestine bicycle ride into the Soviet-controlled eastern part of the city.”  Not sure, but I think Bill Clinton used to sneak out of the White House using the same method.

Kerry continued, “I saw the people wearing darker clothing. There were fewer cars. I didn’t feel the energy or the movement.”  Hmmm.  Dark clothing. Fewer cars (wait, isn’t that the goal: getting rid of evil, polluting cars?).  No energy; no movement.  Mr. Secretary, take some Maalox and leave us alone.

Ever the thespian, Kerry segues from stupid to tolerance.  In fact, he tolerates everything but intolerance.

This is the administration that is so tolerant – and so in love with killing unborn children – that every one of its citizens now has to decide between becoming a “criminal” and subsidizing objectively evil behavior.  This is the same administration that is so damned tolerant that dozens of organizations, companies, states, and individuals have filed suit in an attempt (and, I fear, a futile one) to get out from under this jackboot of “tolerance.”

This is the tolerance of Ceasar.  Just bend your knee and say “Ceasar is Lord” and you are free to go.  Don’t want to do that?  Is that my stomach growling, or is it one of those lions in the arena?  Don’t want Obamacare?  How do you feel about being impoverished by the government and then housed for a decade or so in federal prison? Just bend (over) and you are free to go.

Never mind that pesky eternity in torment thing.  We all know how intolerant the God of the Universe is about having other gods before Him and all.

So when this international moron is talking tolerance and religious liberty, he is banking on the stupidity of the American public, which is a given.

“But if serving the LORD seems undesirable to you, then choose for yourselves this day whom you will serve, whether the gods your forefathers served beyond the River, or the gods of the Amorites, in whose land you are living. But as for me and my household, we will serve the LORD.”